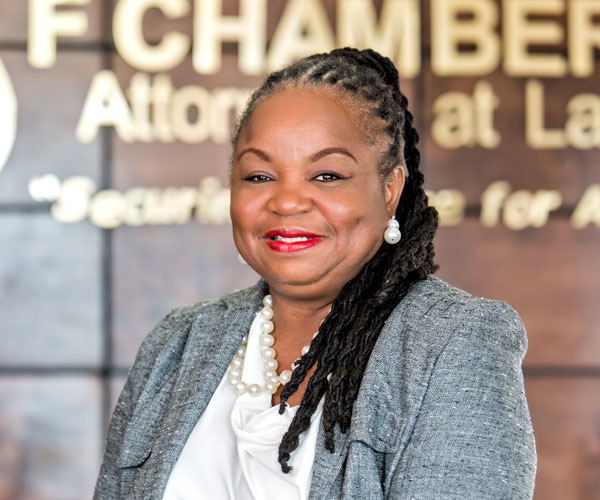 Called to the Jamaican Bar in 1987, Ingrid is a Senior Civil Litigator who is Head of Civil Practice at F Chambers with wide experience in Civil Litigation gained over the period of 27 years that she has been in practice particularly in the knowledge of Civil Procedure and Property Law encompassing land, strata corporation, conveyancing and estate disputes to name a few of the areas of specialization.

Ingrid has appeared in numerous cases in the Resident Magistrates Courts throughout the island of Jamaica, as well as in the Supreme Court and Court of Appeal of Jamaica. Ingrid has also appeared before the Judicial Committee of the Privy Council in London in the Landmark case of Wills v Wills which has had a significant impact internationally on the practice of Law as it relates to claims of adverse possession in land matters and Limitation of Actions Legislation.

In addition to Ingrid’s role as a Civil Litigator she has worn many other hats in Jamaica before joining F Chambers as their Head Civil Litigator such as Assistant Company Secretary for the Urban Development Corporation, Acting Company Secretary for the National Housing Trust where amongst other things she had to deal with numerous legal issues including disputes between Strata Corporations and its members and Consultant for the Sugar Industry Housing Limited where she advised the board and supervised the Mortgage and Debt Recovery Departments of this Statutory Corporation. Ingrid has also served as a member of the Prime Minister’s Task Force for the gifted and excellent.

In 1991 Ingrid established Ingrid Lee Clarke & Company (Legal Services) Limited of which she is the Chief Executive Officer and in 1993 she joined in Partnership with Duke E. E. Pollard one of the principal drafters of the articles founding the Caribbean Court of Justice, to establish the Boutique Civil Litigation Firm of Pollard Lee Clarke & Associates of which she continues to be a consultant having relocated to the lovely Islands of the Turks and Caicos and joined the F Chambers family.

Prior to joining us here at F Chambers Ingrid had also taken on the role of Adjunct Lecturer in Jurisprudence for the University of London Law program offered at the University College of Caribbean where she imparted her knowledge and love of the law to her students for some time.

Cases in which Ingrid has been involved which have helped to shape the jurisprudential landscape may be viewed elsewhere on this website.